My advanced undergraduate investments class is working through the mathematics of Markowitz efficient frontiers and Sharpe’s intuition about systematic vs. unsystematic risk in development of the capital asset pricing model. After class, a student stopped to ask me about why the math I’m putting upon him matters. To me, “why does this matter?” is an excellent question–particularly at this stage of an education: nearing graduation, thinking about how the details fit into the bigger picture is a skill that often goes undeveloped.

My student understands the mathematics intuitively–he can visualize what’s going on, but doesn’t really see the need to spend his time learning about the math, particularly if lots of the classroom, textbook models don’t work especially well under the harsher conditions of real-world finance. Why learn about how to calculate beta if the arbitrage pricing theory or a Fama-French 3-Factor model works better?

Later in the day, I relayed that conversation to a friend who suggested I could relay the story of Piet Mondrian’s development as an artist as an analogue to this problem: why learn the basics if I have a general understanding and intuition for the craft.

Mondrian’s work is most well-known to us lay people as white backgrounds with horizontal and vertical black lines, interspersed with patches of pure color: blues, reds, yellows. He’s one of the creators of the minimalist school of abstract art, but what is frequently unconsidered is how those well-known compositions weren’t created by a young student experimenting. Instead, Mondrian is a story about an artist who learns the fundamentals of his craft before branching out into his own direction.

Near the turn of the 20th century, young Dutch painter, Piet Mondrian (b. 1872), learned the basics of translating what he saw in the world around him onto canvas. In his 20s and early 30s, his works are pretty classical–he’s painting landscapes. He clearly has a gift for illustrating what he’s seeing: 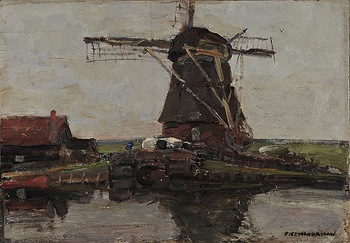 If you asked me what I thought the Dutch countryside looked like at the turn of the 20th century, this is my mental image; a little windmill near some water. It’s pretty solid work; if there’s a theory to art, then this young Mondrian has clear intuition about how to capture what he’s seeing.

At 32, Mondrian is painting in the wake of the Impressionists (Renoir, Monet, Pissarro) of the late 19th century, who have become skilled at capturing what we’re seeing “not exactly,” but with enough detail that you can totally understand what’s being captured. Here, Mondrian is learning the basics–it’s a landscape, it’s fairly concrete in message, and we’re experimenting with using just enough detail to capture the scene. But he’s a few years behind–the Impressionists were at the forefront of art in the late 19th century and he’s working on this just after the turn of the century. 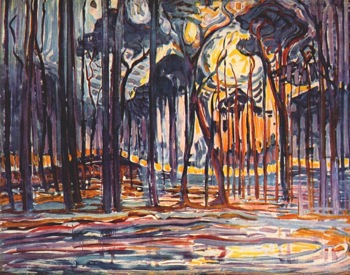 Move forward a few years. Mondrian has more experience, is more comfortable with image delivery. His mastery of the basics and the ideas of the guys he’s following is clear. He’s built on his intuition about to convey something to his audience and is now pushing forward to new areas. By 1911, he’s experimenting with new styles, having caught up with the direction of the art world–this is roughly the point at which Picasso is developing cubist art–and Mondrian is creating along similar lines. This cubist art pushes the bounds of how we interpret art and the images we see. 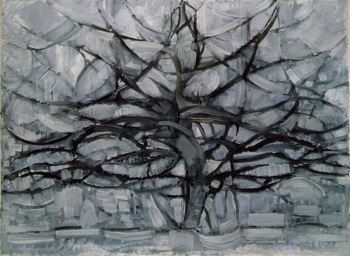 It’s clearly a tree. I’m certainly no art expert, but to me it’s capturing a tree, barren of leaves, stark against the dismal winter sky. But look at how little detail there is and yet the art totally convinces us to imagine the details of that knotty tree, curled in on itself, waiting out the winter’s harshness.

Here’s where the story gets interesting. Here’s a painter that is now working alongside the leading artists of his time, pushing the envelope of how we think about what we see. He’s totally capable of producing the old works (see the landscapes in his 20s and 30s), he’s put in lots of work in post-impressionism, and cubism (see his works in his late 30s). And then he moves off into his own direction. He’s got enough of the background, enough skill with the fundamentals that he can explore and create totally new areas. He’s beginning to experiment with new ideas in his 40s: 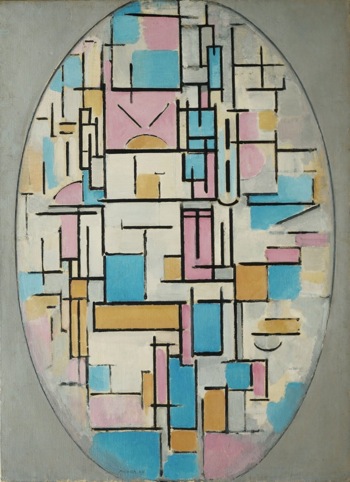 This is the direction he goes. Ultimately, his experiments in abstraction evolve into very stark work, with the black lines interspersed with patches of pure color. By the time he’s in his fifties, he’s beginning to produce the works that he’ll become famous for: 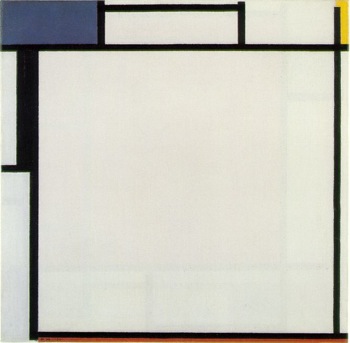 It’s this style that will help create an entire school of art, minimalism. 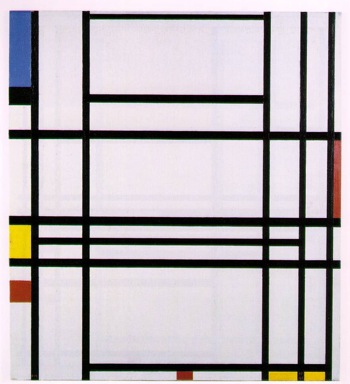 This style of art shows up in all kinds of forms. The cover of Vogue magazine in 1965 featured a girl in a Yves St. Laurent’s dress styled along these later Mondrian patterns.

Here’s the basic take-away: Piet Mondrian’s vision and experimentation helped push art into completely new territory. But it’s hard to push the boundaries if you don’t have sufficient training and mastery of the the fundamentals of the practice. When you think about Mondrian’s work, the important images that we immediately associate with his name, we’re thinking about a somewhat finished product. We don’t tend to think about where he was developmentally before his better known works of the 1920s, 30s, and 40s, when he’s in his fifties or seventies. But he started with the basics–painting landscapes in the backyard, advancing to capture some of the impressionist style, catching up with the cubists, before branching out and doing his own thing.

Ultimately, what I try to convey in class is just the first step in that long route. It’s the painting of landscapes. We’re trying to establish how we convey information–prices are information, after all. We’re illustrating the very basics of what we know and how we know it. And you’d want to master those basics and experiment off of them to see what works and what doesn’t work. To get to mastery “probably” requires some facility with mathematics, because you can experiment with ideas in a rigorous way. Of course, there are plenty of stories of guys who’ve done well in markets without any training in mathematics (and probably plenty more guys who’ve gotten crushed, but whose stories remain largely unheard). That suggests that it’s incredibly hard to do very well at the game if you don’t truly understand the mathematics at a fundamental level.

You can do alright in markets if you follow the basic instruction, just as Mondrian’s early work is pretty solid. But I’d guess that the real money is in developing the new schools of thought–understanding at a core level what is driving the bus and figuring out exactly when you want to get off and starting out on your own.